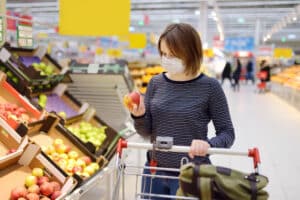 Older shoppers have gained the confidence to return to supermarkets since the coronavirus vaccine rollout, sending online food sales down over the past four weeks.

The largely vaccinated over-65s have increased trips to shops by 6.8 per cent — more than double the national rate.

Government orders to stay at home during the pandemic caused an explosion in demand for grocery deliveries, which led to online food sales doubling from 7 per cent before the crisis to a record 15.4 per cent last month.

The retail industry has been trying to estimate how much of this will remain online once coronavirus restrictions are eased. Supermarkets have spent millions on hiring more drivers and expanding click-and-collect services.

Online sales dipped by 0.9 per cent from their record levels in early February to 14.5 per cent in March, the result of 13 million more trips to supermarkets and 143,000 fewer over-65s placing online orders, according to figures by Kantar, the market research group.

Retail chief executives have said that they believe the shift to online shopping will result in lasting, fundamental change. Online sales remain 89 per cent higher than this time last year, reflecting the growth of the market, according to Fraser McKeviit of Kantar.

Total grocery sales rose by 7.4 per cent to £31 billion in the 12 weeks to March 21 but sales over the most recent four weeks have fallen by 3 per cent.

Tesco, which has increased its delivery service from 350,000 orders a week to 1.5 million, increased sales by 8.5 per cent over the 12 weeks. Morrisons’ sales increased by 8.7 per cent, Sainsbury’s gained 7.3 per cent and Asda rose by 7.6 per cent. Aldi and Lidl, which have missed out on the online food boom, boosted sales by 1.5 per cent and 2.9 per cent respectively. Ocado sales lifted by a third; despite the online grocer’s boost during the pandemic, it still has only 1.9 per cent of the British food market.

Tough comparisons with sales this time last year, when panic shopping gripped the nation, mean that most supermarkets will be reporting negative sales figures in the coming months. However, Easter trading and looser restrictions should provide a boost.

Read more:
Vaccinated over-65s are a shot in the arm for supermarket in-store sales