Just one day after the emergency Fed rate cut did nothing for markets, U.S. contracts for the S&P 500, Dow Jones and NASDAQ are soaring. As well, European stocks have extended an advance.

Yields plunged to below 1.00 levels for the first time in U.S. history, extending Tuesday’s drop.

Futures for the S&P 500 rose this morning, fluctuating between the uptrend line since May 31 and the 200DMA. 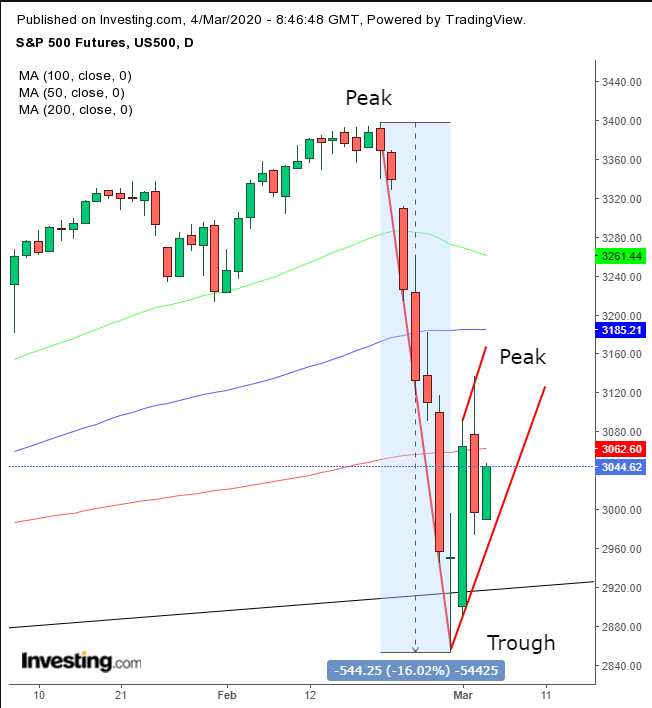 The upward congestion between these two technical milestones trades according to a rising flag, bearish following the 16% freefall in just seven sessions. This preceded the pause in what might become a downtrend with another leg down, and a drop into a bear market, with a close just 4% below the Feb. 28 low. Conservative analysts would demand two peask-and-troughs independent of the previous uptrend, in order to declare an official downtrend.

On Wednesday, the Stoxx Europe 600 Index continued its advance, shaking off a weakness in bank shares that initially pulled the pan-European benchmark into losses.

Earlier today, the Asian session presented a mixed picture after a messy session fueled by Hong Kong’s disappointing February Manufacturing PMI and China’s Caixin Services PMI which both fell to record lows, underscoring the devastation the virus has wrought to manufacturing lines and supply chains, in a region heavily dependent on exports for growth. 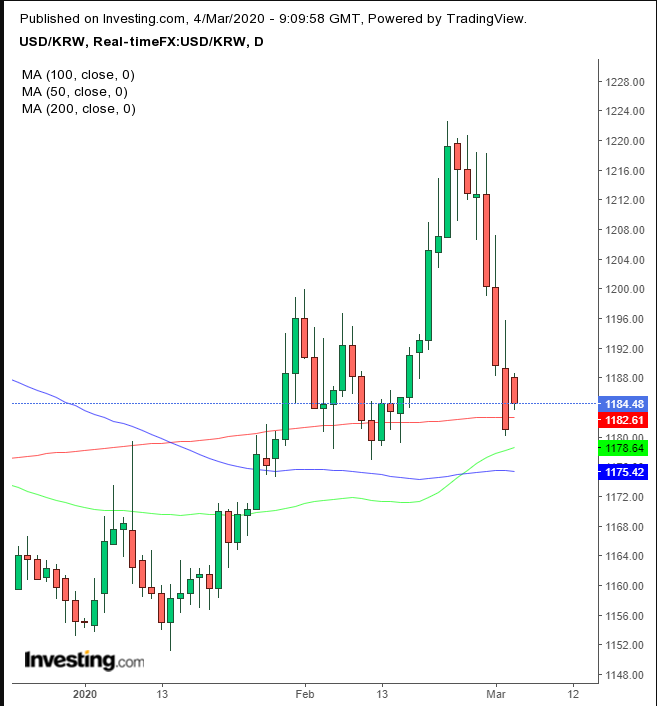 From a technical perspective, the USD/KRW found support by the 200 DMA, after the major MA provided a resistance at the beginning of the year.

Yesterday’s U.S. session was eventful; during the early part of trade, markets extended the rebound from the Feb. 28 bottom, the worst sell-off in years. However, when the Fed’s half-percent emergency cut was announced, markets drastically changed course. Investors may have demanded it and U.S. President Donald might have commanded a cut of at least one percentage, after Australia cut a quarter-percent to combat the virus, but the surprise Fed move appears to have panicked markets rather than eased fears.

As we noted earlier in the week, the Fed would have preferred not to cut rates, knowing it would be ineffective. A half-percentage point cut was simply not enough and had already been priced in.

Moreover, the U.S. central bank doesn’t have enough ammunition left in its arsenal now to support the economy or the market. Our point remains, were the U.S. administration to only deal with the core issue, namely the coronavirus, that would allow for a return to economic growth and presumably market rallies.

All the cut did was aggrevate preexisting fears, while underscoring the risk to the local economy, as the U.S. coronavirus death toll reaches double digits. 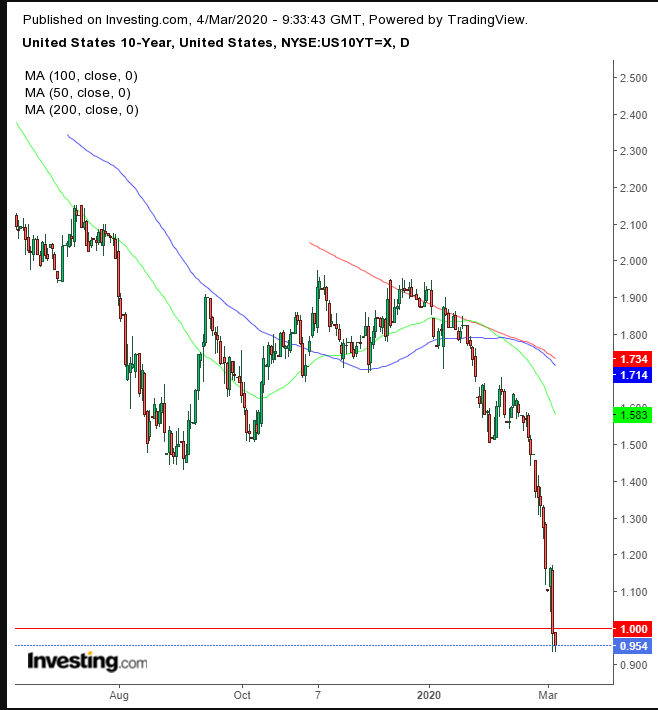 The yield on the 10-year Treasury slipped even lower, after falling below 1% for the first time in 150 years. 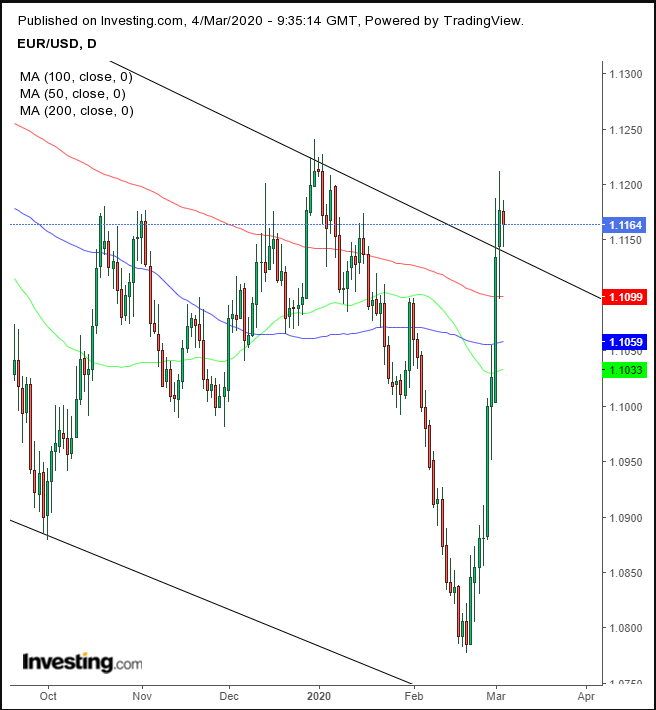 The euro paused after posting its best four-day rally against the dollar since January 2018. Technically, the pair remained above the falling channel since August, which it broke out of yesterday.

Oil extended gains after an OPEC+ committee recommended a larger supply cut, to offset lost demand from the spread of Covid-19. 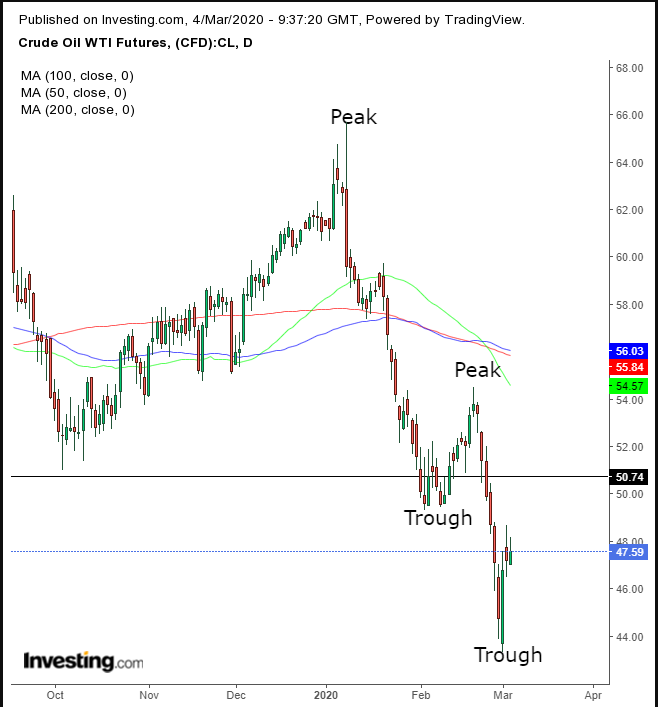 However, the commodity has been unable to keep its highs, as it nears the $50 broken support since January.