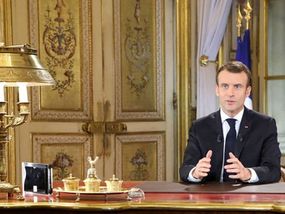 EMMANUEL MACRON’s government has reacted furiously after protesters tried to storm a Paris theatre being visited by the French President on Saturday evening. The young leader wants to replace the country’s byzantine pension scheme with a universal, points-based system. However, the plans have caused outrage in France, with unions saying the changes will force millions of people to work longer for less.