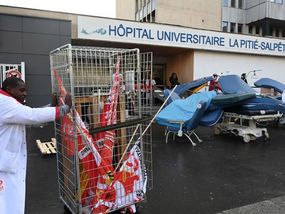 FRANCE’s state railways have lost around £509 million since a crippling transport strike against the government’s pension reform plans began on December 5, the head of the SNCF rail firm said on Monday. More than four weeks of nationwide industrial action against President Emmanuel Macron’s pension overhaul have disrupted railways and roads, shut some schools and brought more than half a million people onto the streets.