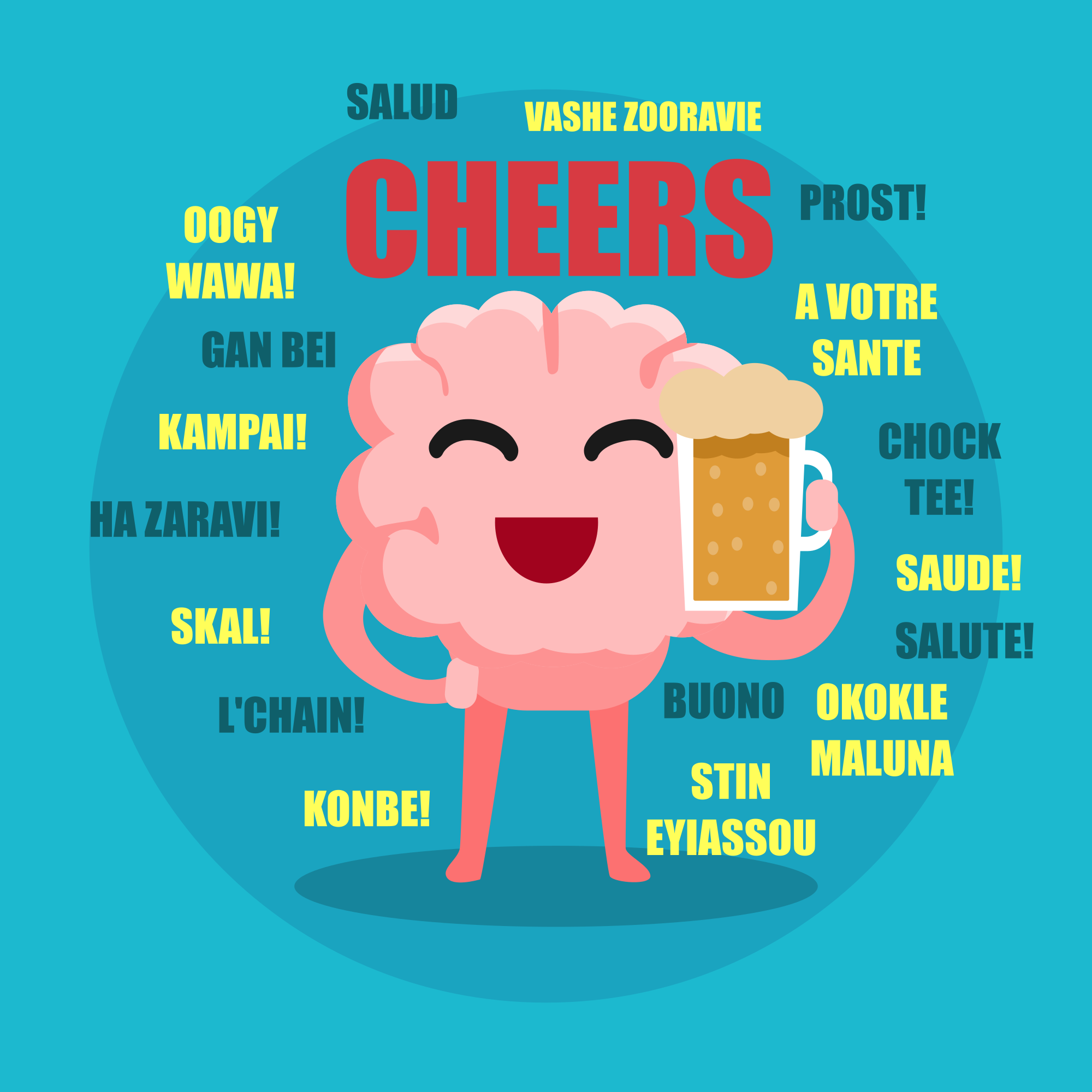 “In wine there is wisdom, in beer there is freedom, in water there is bacteria.”
— Benjamin Franklin.
This International Beer Day, we celebrate everything we love about a beverage that has been part of the fabric of human society for thousands of years – recipes as old as 5000 yearshave been discovered. However, there’s a lot more to the human experience than beer, and we often have responsibilities to think about. We looked around for some science-backed ways to help you stay responsible on one of the more fun days of the year.
Your brain on beer
Alcohol’s influence on the brain is complicated because it affects the levels of several different Neurotransmitters at once. Neurotransmitters are the chemical messengers used to send signals around the body – anything from information about what you’re looking at to telling your heart to slow down a bit. This is why alcohol is considered to have the effects of both a stimulant and a depressant.
Glutamate, a neurotransmitter usually associated with increased brain activity and energy levels, is inhibited by alcohol. At the same time, alcohol increases your levels of GABA, a neurotransmitter generally associated with inhibition of brain signals. This slows you right down and makes you feel more relaxed. It’s why your inhibitions are lower – GABA has literally inhibited your inhibitions. It’s also the reason that drunk people slur and stumble.
At the same time, alcohol increases your dopamine levels. Dopamine is a neurotransmitter most well-known for being associated with our brain’s reward system: it makes us feel good.
In summation, you’re all slow and not thinking straight but you feel great about it. This isn’t to make you feel guilty: alcohol in moderation can have several protective benefitson the heart and the social benefits of alcohol can have long term positive effects on your health. We’re just explaining the situation before we dive into how you go about being responsible with it.
Sheer Force of Will?
Self-control is inherently difficult. Even the most steadfast among us has difficulty reigning in their worst impulses all the time. This problem becomes exacerbated with alcohol in the mix because your inhibitions are lowered. Remember when you said you would go out for one drink and then you somehow ended up having a few more? You probably did fully intend to have a single drink when you walked in, but then your inhibitions took a dip and suddenly a second (or third) draft didn’t sound so bad.
A study published in 2016 puts forward the idea of having situational strategies that help you maintain self-control. Often, the best way we can exert self-control is by avoiding situations that require it entirely. For example, instead of going to a bar to enjoy a few drinks with friends, try going hiking or paintballing. You can still have beer afterwards (or during if you’re brave) but you’re less likely to overindulge in a situation you’re not used to overindulging in. Conversely, if you’re going to a bar then bring only enough cash for a set number of drinks. Then you don’t need self-control: you can’t afford to drink more.
Tricking your brain into moderation
Of course, you could be even sneakier with yourself.
A study at The University of Bristol on the shape of drinking vessels had an interesting result: when a beer glass had straight sides (rather than curved) people tended to drink less and more slowly overall. They posited that this had something to do with it being harder to track how much you’ve had so far when drinking from a curvy glass. As a result, you drink faster.
Similarly, another study found that when people filled their glasses to just halfway instead of filling them to the top they drank 20% less on average.
Both these results suggest that awareness of how much is in your glass at a given time is key to keeping an eye on how much you’re drinking. The latter method also involves slowing your drinking down – by filling your glass to halfway instead of full, you now have to go back for drinks twice as often if you want to over-indulge. This acts as a significant barrier, too – you don’t need self-control when time is a limiting factor. It’s for this reason that “spacer drinks” (a glass of water between each unit of alcohol) are recommended when drinking. Your kidneys will thank you, too.
Happy International Beer Day!
However you choose to spend this Friday, we hope that you stay safe, that the beer is cold and your brain doesn’t hurt the next morning.